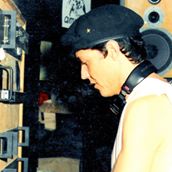 The Father of the Balearic Beat Born in Argentina, 1953, Alfredo Fiorito lived in his native town of Rosario until the age of 23. In 1976 he left his homeland and immigrated to Spain, ending up a few months later on the island that would shape the rest of his life-Ibiza. One year later, his son Jaime was born and for the next few years Alfredo dedicated himself both to his child and to various job roles including fashion designer, candlemaker, delivery man and barman, amongst others, All of these were a far cry from his original trained profession, as Journalist in his native Argentina. Apart from the aforementioned variety of jobs, Alfredo's life had always had some connection with music, in particular, as music critic on a newspaper and concert producer.

From 1982, this interest was stepped up, as Alfredo decided to try his hand at DJing. It was a good move, and one that today, some 20 years later; he views with the same enthusiasm. In his first year he combined his new skill of DJing with that of Barman in a bar in Ibiza Port. It was whilst multi-tasking in this same bar, known in those days as Bebop, that he was approached to DJ at Amnesia. At that time, the club was renowned as the most underground venue in Ibiza, since then, of course, it has gone on, due in part to Alfredo, to become one of the most famous night clubs in the world. Alfredo played his first session in the super club in 1983 in an event called Imposible, which didn't quite attain the success hoped for... Thankfully for the entire dance music industry as we know it, and not to be outdone, Alfredo didn't give up. Alfredo could never have imagined the success that was soon to follow.

By his own admission, a combination of lucky circumstances and a great team at Amnesia helped him to achieve the success as a DJ that he had dreamed of, and to this day, he maintains a great respect for and many fond memories of that same original Amnesia staff not to mention party goers...Amnesia soon became the best after club in the world. The crowd grew weekly, transferring their socializing from Ku (now known as Privilege) to Amnesia to form an intrinsic part of never before witnessed scenes of wild and carefree fun in the sun-glasses on, dancing in the sunny open air terrace that became the legend we all know today. Straight, gay, bi-sexual, young, old, black, white, brown, trendy, hippie.. such a diverse mixture of people had never been seen under the same roof( or lack of roof rather). The common denominator that bound it all together--the music--as provided by DJ Alfredo Fiorito. Of course, in those days, and before the House Revolution took place, the soundtrack to any club was on the whole much more varied... On your average night, you'd be as likely to hear salsa as rock and roll, Bob Marley as Luccio, Madonna or Tears for Fears.

One could describe it as a total Mumbo Jumbo, a mad medley of all that was, indeed, is, great music straining up and out of the club and into the sky above. Throughout those first two years the reputation of the club and its sound grew not only on the island but also internationally. Amnesia's clubbing public consisted of not only the locals and Spanish mainlanders but Italians, French, German, Swiss and the rest of Europe, not to mention Americans and Canadians.Each individual made Amnesia their place to be and it wasn't long before word spread amongst the hoi polloi of the music and entertainment industry. Star personalities such as Grace Jones, George Michael or Boy George were joined by VIPs from European Royal Houses, amongst them , Prince Albert of Monaco. All in the name of Party. By 1987, both Alfredo's summer and winter diaries were full, summers spent on the island behind the decks at Amnesia, winters spent DJing in mainland Spain and the rest of Europe, building his name up to an international standard throughoutthe world, whilst simultaneously improving his sound purely by traveling further afield and having to a wider range of music and artists It wasn't long before the English got wind of what was going on in the small Mediterranean island, and soon started arriving one by one to see and hear for themselves what all the fuss was about. It was 1988 and already the Ibiza sound was undergoing changes.. the first strains of Chicago and Detroit House were filtering through to be combined with the newest German techno from the likes of Kraftwerk and Nitzer Ebbe.

The crowd had converted into a multitude and was hailed as a phenomenon amongst music lovers and club goers around the world. It was at this point that yet another key moment was to take place, when a group of then unknown English boys and amateur DJs landed in Ibiza and headed for Amnesia. Their names? Danny Rampling, Paul Oakenfold and Nicky Holloway. So overwhelmed at what they saw and heard on the dance floor at Amnesia, they declared themselves total converts to the cause, and decided to give it a name and take it back to England. And so the legend that is the BALEARIC BEAT was born. Within months, the UK club scene grabbed onto the new fresh sound with both hands and although pioneered by Alfredo back in Ibiza, it was primarily being relayed by Rampling, Holloway and Oakenfold in the UK. Soon, it was making headline news in the UK press, with even The Independent was talking about the new musical style from Ibiza on its front page. As a result of this extension of the sound to British soil, the 1988 Opening Party consequently played host to a few more new characters behind the decks. Alfredo was joined in the DJ cabin by one of the heroes of the M25 macro parties, Adamski as well as well known rapper Ricky Lyte. The party marked the start of a new era, not only for Alfredo or Amnesia, but for the Ibiza party scene in general. Things would never be the same again. 7 hours a night, 6 days a week, and six incredible years later, in Alfredo's own words, he 'created a very special atmosphere, a species of imaginary journey, a return ticket from Reality.'

In 1988, Alfredo was made Artistic Director of the club he had helped on its way to worldwide fame, a role which he relished for two more years before he decided that it was time for a change. The next stop called, and it was time for Alfredo to pack his record bags and take up a post as Resident DJ at Pacha Ibiza. His name and reputation obviously having gone before him, he brought a modern and fresh touch to the world famous club. Although he worked the same grueling hours as he always had throughout the summer season, his winters showed no sign of Alfredo slowing up on the club circuit. He toured the UK extensively, especially Scotland and the North of England, two regions were dance music in particular was being produced at a rate of knots. There remained not a single nightspot on the scene that didn't book, or try to book, Alfredo to entertain their public on the dance floor. 1990 also saw our man journey to Singapore to inaugurate and work as Resident DJ for three months on the hottest new club in Singapore- the Zouk Club.

To this day, Zouk remains reputedly the best club in Asia. After making himself known in Singapore, Alfredo also went on to travel frequently and extensively throughout the Far East particularly Japan and Thailand. After three more years as Resident in Pacha, it was time for our hero to take a break, it had been non-stop action for 10 years and a break was long overdue. So some months off were taken, the summer of 1993 to be precise, and a refreshed and revitalized Alfredo came out smiling at the other end. It was 1994 and it was back to the grind. Having been approached by the Manumission Brothers, Andy and Mike Mc Kay, it was an opportunity to once more take up the disco baton and carry on where he had left off some months before. Since that virtual rebirth, at the same time as Manumission themselves launched the world's biggest party, Alfredo has continued to be the longest serving resident of that team, led by Andy and Dawn, Mike and Claire. His work for Manumission has given Alfredo a personal satisfaction comparable to that of his years spent at Amnesia, due in part to the fact that from its humble beginnings, the super club also have had its own after party, the infamous Manumission Carry On at Space. In both of these, Alfredo has retained the artistic freedom that he was originally granted on his agreeing to work for the Manu team. ALFREDO AT SPACE Tuesday mornings were not his only opportunity to play at Space however. He was soon offered a residency at the Space Terrace on Sundays, a post which went on to earn him the glory of compiling the first ever Space triple disc compilation. That Space Terrace went on to be the first of many compilations and productions from Alfredo. He has worked with an abundance of international DJs and music producers throughout the years, amongst them?

Amongst other destinations that Alfredo has visited in his DJing career, Buenos Aires, Rio de Janeiro, Sao Pablo, Miami, Israel, and every capital and major city in Europe. Despite all that, however, one of Alfredo's most important moments took place back in the island that started it all, Ibiza, when he first DJ?ed side by side with his son Jaime Fiorito, as residents at Manumission and Carry On in 2001. Amongst other international awards and recognition that Alfredo has received throughout his lengthy career, he won DJ of the Decade in internationally known DJ Magazine in 1988. He was also the first DJ ever to receive an award at the Middem Awards in Cannes. More recently, in the 2005 Ibiza DJ Awards, he was presented with a Lifetime Achievement Award, clearly proving his status in the Music Industry.