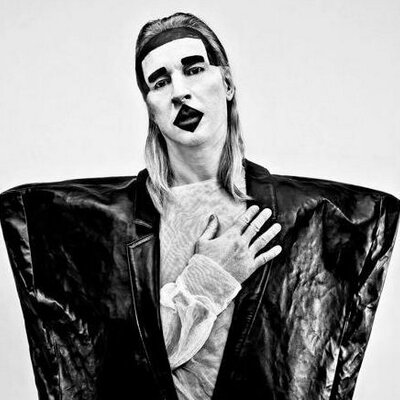 Followers of the German techno icon will know that he is fond of grand statements. And this time he's spot on: Teufelswerk - German for "Devil's Work" - is Hell's masterpiece.

Across 16 exquisite tracks divided into two themes, "Night" and "Day", Hell weaves an intoxicating spell. The nocturnal side offers a contemporary interpretation of Chicago house and Detroit techno. It's sunnier sister disc finds Hell embracing the rich cosmic groove of his roots. A lush, narcotic odyssey, the album sounds unlike anything he's produced in the past. But at the same time, Hell has drawn on his wealth of experience and put everything he knows into Teufelswerk.

"The album is very personal," he says. "All my knowledge is there. I went back really far to the early-'70s. I don't think I can make a better record."

Coming from Hell, whose life mirrors his art, that's saying something. A cultural chameleon with an encyclopedic musical knowledge and a bold sense of style, Hell has carved a reputation as the Warhol - or should that be War-hell? - of our generation.

"Andy Warhol was a people's champion. He ruled the world in his way," says Hell, who once dressed as the pop artist for a photo shoot. "The Factory was pushing art, music, films and whatever you can think about every day. He was a rule breaker. He knew how to play and how to motivate people."

When Hell launched his International Deejay Gigolos Empire in 1996, his rebellious creative streak gave the label a punk DIY aesthetic. An open-ended techno imprint with a natural pop sensibility, Gigolo immediately stood out and attracted like-minded artists such as Fischerspooner, Vitalic, Miss Kittin & the Hacker, Tiga, even the Pet Shop Boys, Jeff Mills and Dopplereffekt. Today, Gigolo in Berlin is to Hell what the Factory in New York was to Warhol. Like Warhol, Hell is the man with the vision, whose enthusiasm and inspiration to this day is fueled by, and rubs off on, the close-knit family of musicians, fashion designers, photographers, film makers, video artists and actors who surround him. Fans of the label will remember the short-lived collaboration with Amanda La Pore, who can often be found in the Gigolo logo and on the Tiga & Zyntherius Video for "Sunglasses at Night." There are many examples of Gigolo and Hell blurring the lines between music and art, a popular aesthetic in Hell's arsenal and one that was celebrated in two gallery exhibitions; one in London, and one in Berlin both in 2007.

Hell - once, a long time ago, Helmut Geier - is 46 years old and has DJed for more than half those years. In 1985, he was one of the first in Germany to DJ house music, back when Steve ‘Silk' Hurley made the first Chicago house tracks. Later, through Gigolo, he put out lost classics by Chicago house legends Bobby Konders and DJ Pierre. He also re-released what's considered the first Detroit techno song, "Sharevari" by A Number of Names, and rekindled the career of new-wave heroes Tuxedomoon. One of Gigolo's key releases is Hell's compilation of early-'80s German post-punk, New Deutsch.

In 1992, Hell's haunting debut single, "My Definition of House Music" became a dancefloor hymn, selling 50,000 copies. Three years later, Hell recorded a live BBC John Peel Session in Munich, which came out as the "Original Street Techno" EP. As a producer, Hell has covered a lot of ground. He's one of the pioneers of German house and techno, and today, as Teufelswerk attests, he's in the finest form of his life.

Perhaps because he is so successful and does whatever he pleases, cutting a glamorous swathe through electronic music, the media tend to be kind to him. In the early days, they called Hell "das gute gewiessen des deutschen techno", which means "the good soul of German techno". No stranger to receiving awards for his prowess in the music business, in 2002, he was crowned Man of the Year by GQ magazine.

Those familiar with Hell's earlier albums, 1998's Munich Machine and 2004's NY Muscle, will recognize the "Night" half of this double-album. A raw mix of Chicago and Detroit influences combined with Hell's swashbuckling approach to electronics, this portion is for the dancefloor. Ten-minute jams such as "Wonderland" and "Electronic Germany" zoom and thrust with menacing intent. "The Disaster", the single produced by Hell and longstanding collaborators Mijk van Dijk and &Me, is the kind of labyrinthine techno trip that will disorientate any dancefloor.

"The "Night" album is what people expect from a guy like me," says Hell, who spins three of four times most weekends around the world. "I choose a lot of producers in different studios with different sounds and put my flavor there. It is from a DJ for the other DJs"

"Bodyfarm", a sinister cut co-produced by Frankfurt's Antony Rother, was inspired by the unsettling images of Taryn Simon, an American photographer and fine artist specializing in uncovering rarely seen sites from the domains of science and government (please visit tarynsimon.com). For "Night", Hell hooked up once more with hip-hop superstar P. Diddy for freestyle jack-track and future single, "The DJ". The pair had worked before on "Let's Get Ill" and "Check This"

The most pleasant, eyebrow-raising moment here is the collaboration with Bryan Ferry, "U Can Dance". This serpentine disco burner, a smoldering highlight of Teufelswerk, finally unites two of modern pop's suavest outsiders.

"I am very proud to work with Bryan Ferry, of course," says Hell, who encountered the singer in London when he was asked to remix Roxy Music a couple of years ago. Hell pruned "U Can Dance" in Vienna with his old friend Peter Kruder, of Kruder and Dorfmeister fame. Here, in Kruder's G-Stone studio, assisted by noted multi-instrumentalists Christian Prommer and Roberto Di Gioia, Hell and Kruder wrote and produced the "Day" half of Teufelswerk. This is Hell's enchanting interpretation of Kosmische Musik, that style of '70s psychedelic experimental boogie played by Can and NEU! This is the music that inspired the beginning of Hell's career.

"I have done Kosmische Musik in a new way," he says. "This is where I come from, I grew up with the early German electronic pioneers of music, and this is why I went in this direction. Often it is called German electronic avant-garde, or psychedelic music. I went back to the '70s and tried to do it in my own way."

Listen to "The Angst", the lead single from Teufelswerk, and you'll appreciate the direction Hell is taking with Peter Kruder at the controls. Celestial vocals cascade around an acoustic guitar figure as a motorik rhythm propels it ever skywards, sharing space, spiritually at least, with Pink Floyd, Kraftwerk and Can.

On "Day", "Germania", "Hell's Kitchen" and "I Prefer Women to Men Anyway" unravel with sinuous grace, culminating in a cosmic reading of Hawkwind's "Silver Machine". Hell is no stranger to covers, having tackled Barry Manilow's "Copacabana," Throbbing Gristle's "Hot On The Heel's" and German No-Wave band No More's "Suicide Commando" on Munich Machine. Although Hell was born in 1962, he was too young to fully appreciate the likes of Tangerine Dream and Amon Duul in their mid-'70s prime. He was more into Slade and Sweet. "Pop and glam-rock was more appealing to me because these bands looked great and were all over the TV." By the time Hell was old enough to dig Kosmische Musik, punk had arrived and he was into the Damned, who sounded new, fresh and powerful.

For Hell, then, Teufelswerk rounds up his life's work so far - and he has already led a remarkable life. It is dramatic, beautiful, dark and soulful, a milestone in German electronic music. "Teufelswerk represents the music in the best way: it's the work of the devil," he says, "and it's the work of me, the work of Hell."

Prepare to be moved, deeply.