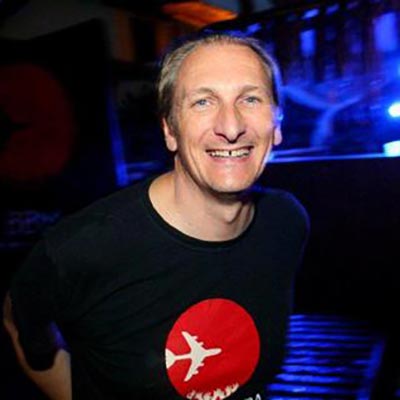 Gee Moore is a DJ and music producer, he had a musical upbringing in England as a professional singer and guitarist in various bands from the age of fifteen.

In 1997 he started as DJ and founder of Bora Bora beach bar Ibiza which rapidly became one of the most famous cosmopolitan beach bar clubs in the world.
He is famed for not only his unique universal sound which covers nearly all styles of dance music from House through to Techno but also for playing to the crowd throughout his marathon 12 hour daily sets at Bora Bora from June to October and he takes that summer vibe and smile with him on special Bora Bora tours throughout the world.

Gee is currently on the Bora Bora world beach tour. This successful tour started in Europe In the summer of 2004 and played to over one million people at events such as the Zurich street parade, SW4 Clapham common London and Heaven London with guest Danny Tenaglia to a sell out crowed that many regard as the UKs gig of the year.
The tour proceeded around Asia before heading to South America at the start of 2005.

After the forced closure of Bora Bora Ibiza in 2004 (see Bora Bora story - web.mac.com/boraboraworld) the search is on to find new Bora Bora Beach venues around the world to continue its global success.

Gee was one of the organizers and DJs behind Tsunami Dance Aid charity event which along with fifteen of the worlds A list DJs helped raise money for the people who were affected by the disaster that hit the west coast of Thailand at the end of 2004.

Early 2005 will saw the release of two more tracks on Media records Italy under the artist title Gee and Slam Dunk Funk as well as other releases and co productions on the new Bora Bora music label (see discography - web.mac.com/boraboraworld)

Record and album releases of from Gee included the successful title track of Gee & Slam Dunk Funk where hes in the process of establishing a new band under the same name, he also works with co producers and has recently released Electrogee, Put your foot down (and prey) and this year the long awaited release of Take u inside with new remixes on DJ Certer rec.
These and many other productions of his were included on the Bora Bora Hybrid CD/DVD compilation Bora Bora Live Vol One & Vol Two, in 2004 it became the biggest selling compilation in Ibiza that summer and received high adulation from the worlds music media.

In recent years Gee has compiled and recorded many more albums and singles not only for the Bora Bora series but for many other leading record companies to add to his impressive production collection..

Gee has now started the Bora Bora music label which aims to release his and other producers work.

Apart from Bora Bora and the tour Gee has over the years also played under his own name for other events in Ibiza for the likes of Mauro Picotto / Meganite at Privilege, Defected in the house at El Divino as well as holding residency for Salvacion, El Divino.
Gee has held residences in all the top 7 clubs on the island of Ibiza. In 2002 he was resident at 5 of these clubs as well as Bora Bora at the same time for promoters such as Trade, Zenith, FXXX House, Clockwork Orange, MTV festival.

Gee has played around the world in venues such as Souviner Spain, Blend UK, Slava Russia, Warung Brasil, to name but a few as well as many more on tour around the U.S.A while at the same time holding residency for After Hour Power L.A in the winter on 2004.

While in Hollywood he tentatively embarked on an acting career, he was fortunate to gain first hand experience by having walk on parts in the last ever episode of the successful comedy series F.R.I.E.N.D.S

Over the past few years hes written many articles for the worlds music press such as M8, Ministry and DJ magazine and made radio shows and mixes for Radio 1, Ministry, Thump Radio USA

Bora Bora has now started on production of a new collection of beach and club clothing.

With this and all that is ahead you can be sure that work will continue to be just one big party for Beachbum Gee.