Born in Ibiza in 1972. A deeply resonant paradise. A bridge for music. His first contact with radio was at 13 when he dismantled his grandmother’s old radio set in order to fit a double deck inside to play his music on.

In ’88, whilst working in a record shop and expanding his collection a friend suggests he tries out for the 40 Principales Ibiza radio station. And so he travels to Madrid where he meets José Antonio Abellán, Fernandisco, Yolanda Valencia and the other great names of the era. That’s how at 16 he became one of the youngest Cuarenta Principales presenters in Spain. At the same time he continues his spots in the DJ boxes on the island. With Bacalao or Rave at its peak, he begins to discover electronic music and to produce publicity slots with the old Revox ‘cut and paste’.

His curiosity for the radio leads him to form part of the Cadena 100 Ibiza team as a DJ. At this point he’s the resident DJ in one small club or another. Goa Trance reaches Ibiza via the MiniDiscs of friends who spend the winter months in Goa. He falls in love with these sounds and plays in open-air raves in the forests and coves of Ibiza, taking a couple of sabbatical years.

In 2002/3 the radio becomes his focus again. He collaborates in a half hour slot in Europa FM Ibiza for David Moreno’s Ibiza Dance Radio Show. This was when he was offered his own hour-long session. And so we see the birth of ‘Melodías Para Tu Sofá’ (Tunes For Your Sofa) a selection of high quality music including: lounge, downtempo, trip-hop and their many varying dimensions. In time his programme moves to Radio Exit and he starts to include guest DJs in the sessions.

Ibiza Global Radio was born in 2004 and with it came the chance to listen to high quality electronic music 24 hours a day. ‘Melodías para tu sofá’ forms part of the programming at this, one of the new generation of radio stations. In the programme he incorporates productions from more than 50 labels.  Jazzanova, Louie Vega, Stefano Gittoni, Gerardo Frisina and many others appear on the programme. ‘Melodías Para Tu Sofá’ is a musical journey ranging from the latest downtempo to the classics, a musical cocktail for 21st century decks.  On the session side of things he has played in numerous places around the island, highlights being in Café Del Mar and the opening and closing of the biggest clubs in Ibiza, as well as in cities such as Cannes, Paris, Lyon, Marseille, Toulouse, Nice, Laussane, Geneve, Milan, Rome, Padova, Berlin, Bodensee, Munich, Fulda, Dusseldorf, Frankfurt, Stuttgart, Nurnberg, Trier, Budapest, Szeged,  Bucharest, Cluj Napoca, Timisoara, Mamaia Beach, Craiova, Vienna, Alger, Copenhagen, Barcelona, Madrid.  In addition he’s also been resident DJ in Space Ibiza, one of the best clubs in the world, since 2007.

In terms of discography he has 12 compilation CD´s edited.
The six Ibiza Global Radio compilations, Primavera with Pshent Music,
the last 3 Space Tranquil Compilations for Space Ibiza and Hysterical Ibiza.
In 2008 he went back to his old ways and started afresh with a new musical stage in his life.
He is currently head of programming in the station and is continuing with ‘Melodías Para Tu Sofá’, ‘Funk-a-Delia’ and ‘LG2d-club’, where his sessions are pure energy from deep-tech sounds and underground house and through which have passed famous artists such as Little Louie Vega,   Sharam, Mark Henning, Nick Warren, Uner, Coyu or Craig Morrison (Silicone Soul).
In 2009 he was one of the DJs playing at the close of MIDEM,(The World's Music Community) Cannes, alongside Groove Armada, and has also signed the deal for his new compilation – Primavera – with the famous label Pschent Music (Hotel Costes, Buddha Bar, etc ) and the Cd compilations Space Tranquil for Space Ibiza with Essential Records.
Right now he’s Resident DJ in Space Ibiza and his sets are flying around the world.
Since Summer 2010, is resident Dj in one of the most cool, interesting and chic  partys in Spain... IBIZA ESSENTIALS.
Josemariaramon just sign his new productions with Escapism Musique, White Island Recordings, Tanzbar Musik, Avioground and Reworck. 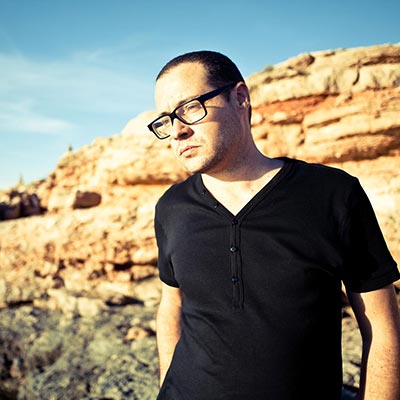