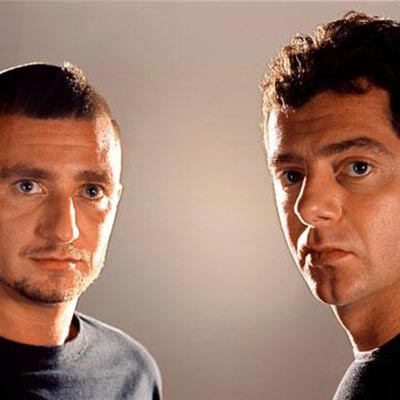 Layo & Bushwacka! are one of electronic music’s most esteemed duos. Comprising of Matthew ‘Bushwacka’ B, a percussionist in the London School Symphony Orchestra who waas converted into a member of the infamous Rat Pack after a warehouse party in ’88, and Layo Paskin, a North Londoner immersed in the acid house scene who met Mr C at one of the legendary Clink Street parties in 1988, before together setting up their world renowned night club, The End. It was via their mutual friend Mr C that Layo & Bushwacka! first met, whilst Matthew was working at his studio, and by the mid 90s the two had started writing music together. Over a decade later, the partnership has yeilded three artist albums, three mix albums, internationally renowned club residencies and a superb record label.

By 1999 they’d already composed their debut album, ‘Low Life’, released on End Recordings, the label spawned by The End. The album announced the arrival of the duo as a force in electronic music, with a record that brought together electro, house and breakbeat fused with blues, dub and downtempo, all underpinned and informed by their collective experience of underground culture. This inclusive and open minded approach to sound became the bluepint for their future work.

Layo & Bushwacka: Night WorksTheir sophonmore album followed in 2002 this time released on the mighty XL Recordings. Entitled ‘Night Works’, the record featured their unforgettable top ten hit’Love Story’, and took their sound onto a bigger and broader canvas, selling 100,000 copies in the process. The accompanying live show brought further acclaim with stunning shows from Homelands to Sonar, whilst their famous DJ sets had now garnered residencies at some the of the world’s finest clubs including Space in Ibiza, Sirena in Brazil and of course The End in London.

Their End residency, known as All Night Long, became one of the capital’s most revered nights with Layo & Bushwacka! taking the club through an edifying tour-de-force of electronic music. The night gave birth to their second mix album ‘All Night Long’, following the success of their first ‘The End’ in conjunction with Mr C, also released on XL Recordigns, in the late 90s. The album was a perfect reflection of their DJ sets, inspirational, educational and all encompassing it slaloms through all manner of house music and even their own reworks of such timeless classics as Bebel Gilberto’s ‘So Nice’ and Sly & The Family Stone’s ‘Dance To The Music’, all without missing a beat.

Layo & Bushwacka: Feels CloserThe expanisve musical tastes demonstrated on ‘All Night Long’ came together perfectly with the release of their third artist album, ‘Feels Closer’, in February 2006. Released on their newly launched label, Olmeto Records, ‘Feels Closer’ saw them broaden their sonic palette with the addition of live musicians, including legendary percussionist Mino Cineleu, on a record that unites their myriad of influences without ever losing sight of their eleftronic background and home territory. Highlights of the record include Green Velvet’s vocal turn on the electrifying electro-techno of ‘Life 2 Live’, the warm downtempo of ‘Sunshine in Ipanema’, featuring the talents of Brazilian legend Rogerio Flausino, and the jaw-droppingly incredible ‘Isn’t This A Lovely Day’, for which the boys fuse vocals from Ella Fitzgerald and Louis Armstrong with some killer live percussion. The album was again highly crictically acclaimed and cemented their reputations among dance music’s most gifted.

Since the release of the album, their label Olmeto has gone from strength to strength, releasing a consistent stream of choice nuggets from the album, wth exclusive remixes and B sides. The impressive roster of remixers has included the likes of Loco Dice, Jesse Rose, Green Velvet and UNKLE. Bushwacka! has also released some fantastic solo 12″s on the label, and as time goes on Olmeto will continue to provide an exclusive outlet for Layo and Matthew’s creativity. Olmeto’s monthly residency at The End, wich has taken the place of the All Night Long residency, sees Layo & Bushwacka! continue to play extended and far reaching sets of electronica in the main room, whilst their impeccable programming has seen them bring in tow of dance music’s most promising labels Simple Records and Freerange to provide music for The End’s second room and sister bar AKA at the Olmeto nights.

The most recent addition to Layo & Bushwacka!’s catalogue is their mix album, Global Underground 33; Rio. Borm out of the ongoing love story between the duo and their second home of Brazil, Layo and Matthew have a unique and unshakeable relationship with the world’s most effervescent nation. Disco one sees the boys scour their record collections, revisiting gems from the past twenty years, flowing through the music that helped shape the DJs they’ve become, whilst disc two represents the new wave of electronic music with a track listing that includes the most dynamic producers in dance music today.

Layo & Bushwacka!Layo & Bushwacka!’s reputation as two of the world’s foremost DJ duos is rock solid. Three artist albums have proven them remarkably talented producers, capable of mixing styles, tempos and genres to create enduring and engaging electroinc music. Their trio of mix albums and international club residencies have show they are masters of the turntables, sonic connoisseurs who can guide a dance floor on an epic journey through the many facets of their sound. Their label Olmeto meanwhile has become a bastion for quality, a lable that, much like its figureheads, has become a rubber stamped seal of class.