Lenny Ibizarre was born Lennart Krarup on August 2, 1972. From the beginning it was clear to his parents that their child had extraordinary skills when he spontaneously fixed a broken television at the age of six. By the age of 10 he was programming machine code in raw hexadecimals and had a habit of completing his annual homework on the first week of school. He quickly turned to experiment with sound and music as the teenager quickly developed a taste for social razzmatazz, and thus fell in love with the electric guitar. Realising that only the very best gets to go in this world, he took to the Suzuki Method to accelerate his technical proficiency and by 16 his speed on guitar was unparalleled throughout the country.

After numerous bands, the summer of 88 came along and, tired of not finding equally dedicated musicians, he called upon his expertise with computers and ventured of into the world of programmed music. As it was clearly not easy to break into the music scene, he went to complete a dual major at Sussex University in econometrics and cross-cultural psychology. Having maxed out all the historical top math grades at the European School of Bruxelles, he found this to be an easy solution to buy some time and perfect his craft. The day after his final exam he was on a plane back to Ibiza with two suitcases packed with Roland TB303’s, 808 and 909, booked to play his first island gig.

Today, Lenny Ibizarre has been an Ibiza based composer, producer, remixer, label owner and DJ for nearly two decades. His flair with technology and precision engineering has earned him accolades of respect from fans and professionals alike. He beta tests and reviews for more than 70% of the music technology software industry and have presented technology at tradeshows all over the world. But the true genius in Lenny is to be found within his ability to heal through music. As he puts it himself: “The construct of the modern egoic mind is ultimately routed in the fear of death. We cling on to things in dread, but the ultimate happiness and liberation lies in the realisation that all things will come to pass. Melancholy is the perfect emotion to express this realisation; it’s a happy-sad feeling: happy for the moments that you’ve had and sad that they’ll never come back again.

As instrumental music is purely a roadmap to the interactions of our emotions, and not scathed by words, all it can do is to describe a unique set of feelings. Melancholy is to me the perfect juxtaposition of happiness and sadness which in turn allows the listener to slip in between and into the enlightened surrender to the mystery of life.” Lenny encapsulated this perfectly when he released his first album “The Ambient Collection”, which eventually brought Mario Warner to sign him with Warner Special Marketing UK. Over the next 5 years they released 6 albums and numerous compilations. Within a year Lenny was remixing artists such as the Doors, Bob Dylan and Bob Marley and his remix of The Doors – Riders on the Storm made its mark by going platinuººm.
His respect for the original song and ability to maintain its core while ushering it into a futuristic dimension have made him the choice producer for many aging platinum artists, who dread being chopped into a glitch dance track. He soon proved himself as one the most successful producers in Chill-Out music, when his Chilled Ibiza with Warner UK went multi-platinum.

Lenny is presently supplying songs towards to next Chilled Ibiza, which is scheduled for a TV campaign this season 2009. Whilst his productions encapsulate Ibiza’s laid back Balearic Groove his DJ sets can range from upbeat ambient to tight progressive house. Lenny’s Ibizarre’s DJ sessions have become legendary in Ibiza as his passion for music transpires in sets that can easily last over 6 hours.

Lenny Ibizarre has held combined residencies in Ibiza at Pacha, Space, Amnesia and Ku (now Privilege) and Café Del Mar for over a decade. His DJ circuit is mostly private parties all over the world but you can still catch him spinning in Ibiza all season. Lenny also has his weekly show on Ibiza’s Sonica Radio at 95.2 FM. 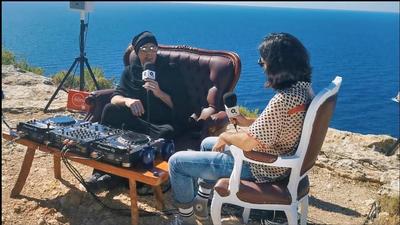