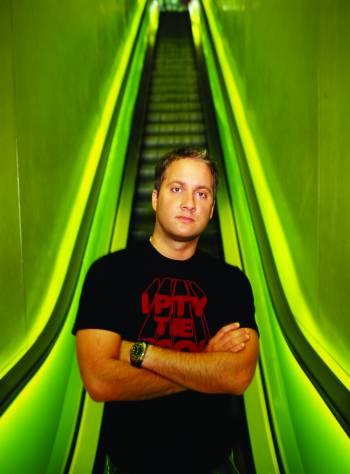 Robbie Rivera, born in 1973 in San Juan, Puerto Rico, had his first encounter with music when he was only 10-years-old. Buying records from acts like New Order, Depeche Mode and U2, it wasn't long before he started spinning records. "I was 13 and had two turntables and a mixer," he says. "I did not know what beat mixing was until it happened accidentally. I taught myself."

While improving upon his mixing skills, he took his first steps in producing music the old fashioned way. Said Rivera, "When I was about 15 years old, the richer kids had the instruments. One of my friends let me use his Roland drum machine all the time and he eventually gave it to me. I also had a real drum kit in my room." Steadily, he moved on. "I was sequencing beats at 16 and doing my own edits of tracks using a two track reel-to-reel machine." He continues, "Yes, it was real tape-splicing editing, back the! Definitely not computer kid's stuff!"

In 1992, Robbie moved to Miami, and in 1996, he released his first record, a real Latin house track on Juicy Music, titled, "El Sorrullo." The track lead to an endless string of productions which were released on established labels like Subliminal, Filtered, Positiva, Mos, Azuli and Strictly Rhythm. His music was licensed everywhere. "My track, 'Bang,' was my first crossover hit, and cuts like "Sex" and "Funkatron" were huge for me at that time. I consider it a highlight in my career that 'Funkatron' was used for the closing of the Victoria's Secret winter fashion show on CBS-TV, while 'Bang' reached #13 on the UK charts and made it to the 'Top 10' in Australia."

All of this success pushed Rivera towards an important step. He said, "I had to continuously shop my music everywhere, and I got tired doing that. That's the reason, in 1998, I officially established my own label, Juicy Music." The label also gave Rivera the tools to identify Juicy Music's philosophy. In Rivera's own words, the Juicy Music sound is, "Tough, sexy, house music!" Nineteen-ninety-eight was also the fortuitous year Rivera wed his long-time sweetheart and current business partner, Monica Olabarrieta. Together, they run the Juicy Music imprint.

Rivera released his first artist album, Do You Want More, which became an acclaimed success. The cut, "Which Way You're Going" hit the Billboard chart, while his big room anthem, "Float Away" (re-released in 2007) became a global big-seller.

In 2008, Rivera's appropriately titled second artist album, Star Quality, was cruising on the dance charts and was picked up for major global releases later that year. The album included, "Back to Zero" and "Move, Move," two tracks that were favored by fellow big hitters such as David Guetta, Paul van Dyk, Tiësto and Rivera himself, whose crowds sing along to the melodies. The two huge tunes gained traction at WMC (Winter Music Conference) and went on to have music fans humming all summer as they appeared on that year's most popular mix compilations: Cream mixed by van Dyk, F*** Me I'm Famous by Guetta, Pure Pacha by Pete Tong, Gatecrasher, and Juicy Ibiza mixed by Robbie Rivera. Other releases like, "Aye, Aye, Aye" feat. C+C Music Factory, "One Eye Shut" feat. Laura Vane, and "Escape," also form part of Rivera's impressive repertoire since their release.

An unabashed workaholic, Rivera is busy in his recording studios when not touring. He incorporates the sounds he hears on-the-road into his music. But the jewel in Rivera's crown is his label, Juicy Music. Juicy Music's roster includes artists as diverse as: Antoine Clamaran, Coburn, Superchumbo, Mark Knight, David Guetta, Steve Angello, Sebastian Ingrosso, Stonebridge, and emerging talent, such as Willie Morales, Paul Harris, Louie Padilla, Rooster & Peralta, and DMS12.

Since 2005, Rivera and his wife and business partner, Monica, have been the driving forces behind the world-renown Juicy Beach party at WMC in Miami each March. The 17-hour events at Nikki Beach Club attract a cast of over 7,500 clubbers as well as A-list DJs, and the party has gone on to become one of the week's most successful events. Likewise, the Juicy Ibiza parties in Ibiza welcomed up to 6,000 clubbers at Amnesia's beautiful terrace in years past and at Privilege in 2009. The Juicy brand is expanding to new territories, including: within the U.S. (i.e. New York, Los Angeles, Chicago); the UK; and Spain, with new locations being added.

Rivera was nominated "Best House Producer" by Beatport and "Best Remixer" by the IDMA (International Dance Music Awards) in 2008. Additionally, Rivera's remixes for Nelly Furtado's "Manos Al Aire" and Basement Jaxx's "Raindrops" have also been hammered by Tiësto, Yazz and the Plastik Population. In 2009, Rivera released the fourth Juicy Ibiza compilation, and the release hit the 'Top 5' in iTunes sales globally, buoyed by the record deals with Black Hole Recordings and Ultra Records. With a residency at Privilege in the summer of 2010, Rivera saw success with the release of his last artist album, Closer To The Sun (Ultra/Black Hole). The album garnered critical praise and a great deal of media attention within the U.S. and internationally with hit singles that included "Closer To The Sun," "Let Me Sip My Drink" feat. Fast Eddie, "Rock The Disco" and "We Live For The Music."

After a highly successful WMC, Miami Music Week and Juicy Beach in early-2011, Rivera gets ready to release his hotly anticipated new studio album, Dance Or Die (Juicy Music/Black Hole) in late-2011. To date, Rivera's music videos and live show footage have been viewed in excess of 8 million times on YouTube. Of his plans for the rapidly approaching future, Robbie Rivera has only this to say, "I'll keep making quality music, period."