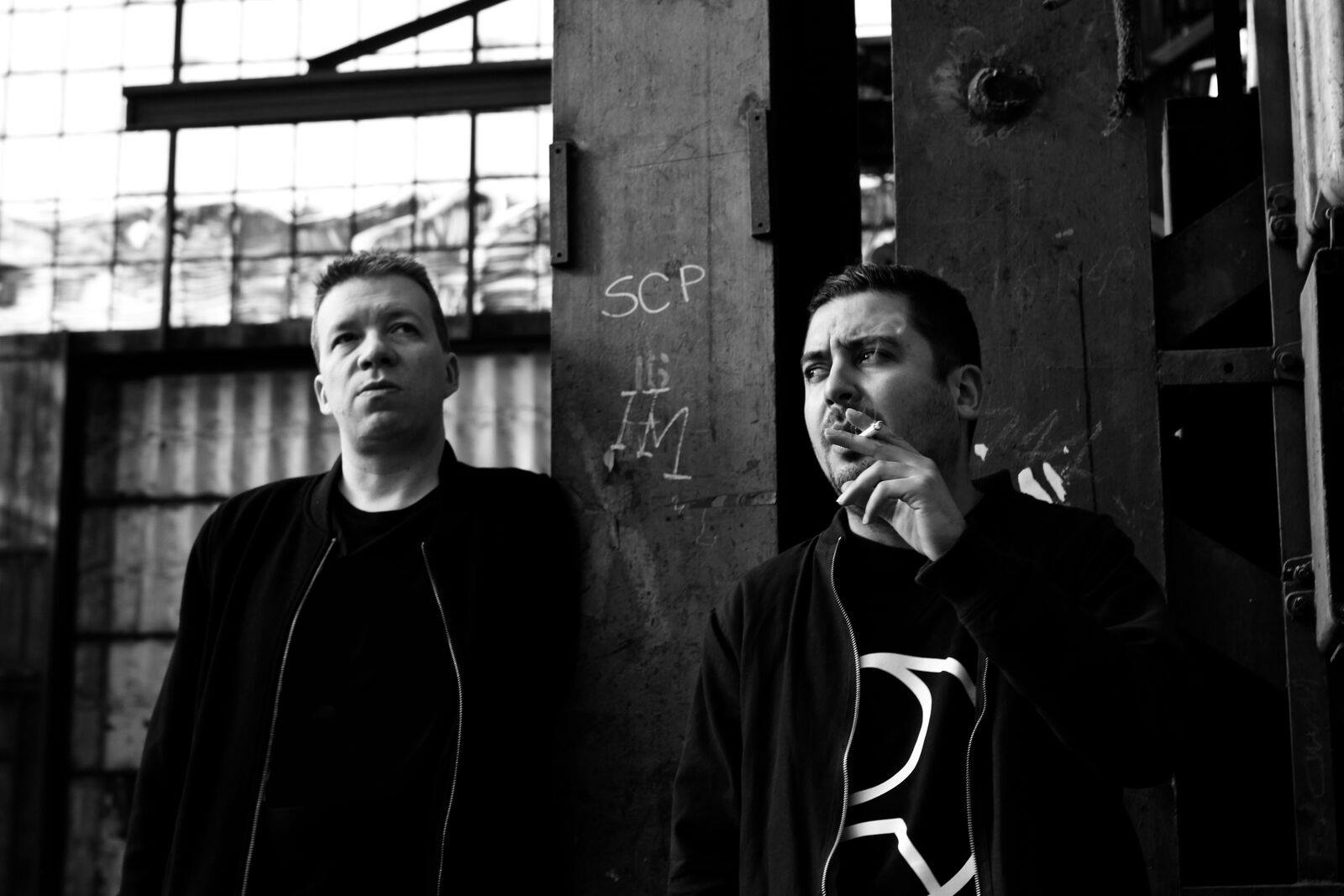 This week our DJ Mix series delves into the vault for an exclusive feature with Abstract Division. The Dutch duo have become one of the most sought after names in the industry. Now fierce anticipation builds for their appearance at this year’s critically acclaimed ADE festival on home-soil. The collaboration project was formed between two established techno artists, Paul Boex and Dave Miller. Paul, head honcho of the respected Dynamic Reflection imprint, is an experienced producer & DJ becoming the driving force behind a string of reputable events in the Netherlands. Dave’s illustrious career of DJ-sets & productions with Damian Keane has been vitally important to the Audiosculpture collective and has spearheaded Abstract Division’s direction.

On a personal note, my first recollection of the two-piece came three years ago at Amsterdam’s bygone Trouw venue. It was one of Sandrien’s legendary IMPRINT residency nights and quickly I understood why the two were part of her carefully curated line up. The crowd came under a gyrating hypnosis lasting for hours into the night with the duo exploring how far they could take them. It was something I had rarely seen and the night became one of those special occasions with friends living long in the memory. These carefree nights where one makes a new sonic discovery are my favourite. I believe one should be open minded and prepared to connect to the DJ, crowd and venue on an almost spiritual level in order to be able to take in those special moments. Naturally, I have since held Abstract Division with the highest regard and kept lookout for their gigs across Europe.

From The Netherlands to Germany, France, Spain and England, Abstract Division have played alongside artists such as Silent Servant, Ben Klock, Blawan, Matrixxmann, Chris Liebing and Speedy J to name a few. The devilish Dutch pairing has proven their passion of igniting all that is in their path, famed for cultivating unforgettable moments wherever the dancefloor may be. A combined twenty years of experience producing & playing tracks on their watch, Abstract Division’s knowledge of the game is flawless. Whether it’s setting the mood, playing with obscurity or unleashing thunderous beats: leave it to the boys to deliver every time!

Check our quick catch up about their year, latest releases and upcoming events. So, if you are still in the dark you on exactly who Abstract Division are, take a journey through their spell and uncover the extraordinary talent during ADE 2017.

An entire year is almost gone again, and it seems to us that it was quite a successful one for Abstract Division. How would you guys sum up in retrospect the past year?

We’ve certainly had a very busy year, with lots of gigs and releases. We're very grateful that we can do our thing on so many cool places and that we get to meet so many lovely people along the road. We are blessed!

Your label Dynamic Reflection, saw some pretty great releases in the past months including your ''Activated'' EP. This particular release was received very well in the industry, could you tell us a bit more about it from your point of view?

Well, after putting a lot of work in completing our double EP "Contemporary Spaces", we didn’t want to dive straight back in to the studio to make another EP right away. So instead we allowed ourselves some time to experiment with new ways to work, and dig for new sources of inspiration. So, yeah, we definitely took our time to come up with a new solo EP, but for good reason. It also means we had the chance to really put quite some work and thought in this EP. The challenge we set out with, was that we wanted to do a powerful blend between an A-side with powerful pure dancefloor stuff, and contrast that with a really deep stuff for the B-side. All in all, we're very happy with the result and also with the way it got picked up in by the scene.

Not too long after Activated, there was Abstract's participation in the FIGURE jams series. How did you get to release on Faki's new label?

We first met Len Faki at Awakenings Festival and we had great connection from the start. Len Faki is one of the hardest working DJ’s in our scene, and the releases on his labels have a high quality standard. Besides, the Figure crew is a passionate group of people, so it was a no-brainer when they asked us to send over some tracks for their new sub-label. We sent over a couple of tracks and they were signed immediately. We were very pleased about that, it’s always nice to find that sort of direct connection. The first release did very well, which brings great opportunities for the future. We're already working on some new stuff for them.

In the past year Abstract Division have been rather more present online and constantly touring between The Netherlands and Germany. Only in Berlin alone, we got to see you more than twice. How do you like the increasingly busy schedule?

It's true it can be exhausting sometimes, especially when we do 3 gigs a day, but we love our job and we would not want to do anything else in the world. Spreading the love and pleasing a lot of people across the globe with your music sounds like a dream, right?

Now during ADE, you are on the line up of one of the coolest end-of-summer festivals “Into the Woods” and you are rather the heavy artillery if we can put it that way. How did you come around to play that event?

You never completely know how these things happen. However, if we have to guess, it's because we initially played on "Wildeburg Festival" which is organized by the same promoter as Into the Woods. Wildenburg is steadily on the rise to become one of the most interesting festivals in The Netherlands, it has a great vibe and the way the festival is set up is just amazing. So we were stoked to get invited to play on one of the main stages on the Friday. We played one of the last slots, right after Avalon Emerson and she was absolutely killing it. It was not an easy job to keep that energy high, so we had to really step up and give it our all, but I guess it is safe to say that we did really well. We got a lot of great feedback afterwards on that set, so maybe that’s why the organization decided to book us again for ADE? Who knows… But we're happy to be part of it. Gonna be another great one!

What we are even more impatient about is the HIGGS live x Dynamic Reflection at Radion. You have invited great artists to play alongside you and we couldn't be more excited. Can you tell us more about this event and how did it come to life, and why Radion?

Last year we did the label showcase for the first time at Radion, in collaboration with our friends from Higgs. It was such an amazing experience that straight away we knew we wanted to do it again this year. The "Bovenkamer", which is Radion’s second room from, is just the perfect place for this. It's dark, not too big, about 350-400 people, and it has a stepped dancefloor, starting from the back right up to the DJ booth in the front. Which makes it super cool, because you see people dancing on different levels. It's a private/invite only event, to which you can RSVP via a link in the event on Facebook. The entrance is free and you get to see some great artists who all share a connection with the label. Jeroen Search and Stefan Vincent are both label residents and Matrixxman and SHDW & Obscure Shape are good friends who recently did remixes for the label. We just couldn't be happier, pretty sure it’s going to be even better than last time. Make sure you get a spot on the list!

Considering the loss of one of the best venues in Amsterdam, Trouw, there are quite a few new venues which are great. Also, not just in Amsterdam, Utrecht and Rotterdam see quite some development in that regard with opening more and more clubs. Why do you think is that rather sudden increase in demand and which is your absolute favorite place to play in the Netherlands? And Berlin?

Well underground club culture is definitely spreading rapidly around Europe and the rest of the world, so the opening of new clubs is probably just a response to the increasing demand for quality electronic music. Also nowadays cities like Amsterdam and Berlin pride themselves with a vibrant night life, and in and stead of trying to fight it, they help facilitating a healthy club culture, which surely helps to raise the quality of the night clubs. Next to that, with electronic music is finding it’s way into high culture, people are really starting to take it serious as a genre and a honest way to make a living. As a result, there’s not only a lot more appreciation for the music, the history and the culture that comes with it, but also for the artists and clubs that helped building this. Their work serves as a major source of inspiration that keeps drawing young people to the scene, who then proceed to become artists, start their own labels, open new clubs etcetera, so the story keeps constantly evolving. As for us, we have no favorite places. Wherever our music is welcomed with enthusiasm, we are glad to play.

Would you like get our weekly newsletter and stay up-to-date? Please enter a valid e-mail address!